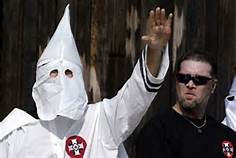 The political left and right are commonly viewed, incorrectly, as a linear function: the further left or right the greater the separation. More properly it is circular function, i.e. the further one becomes “right” the closer one gets to the “left,” and vice versa. If we compare the historic archetypical right-winger Adolf Hitler with the archetypical leftist, Joseph Stalin, there really was little difference. They both yearned for and largely achieved a totalitarian state in which not just speech was but even thought was controlled. And, of course, countless millions suffered and died in the process.

We can apply this circular concept to the fracturing between right and left we seem to be experiencing today. Though I suspect the pathetic right-wing white supremacists are comparatively small in number despite the media and social media hype, they have a commonality with the progressive left antifa fascist movement in that they are all, to resurrect an apt term from the 70s and 80s, douche bags. While rarely do we see the KKK minded people dressed in the full regalia of white sheets and hoods, which I always thought was tacky from a fashion standpoint, metaphorically at least they are interchangeable with the more stylishly black clad antifa fascists and their jaunty balaclava face coverings.

Neither side can verbalize their goals and aims beyond bumper sticker drivel. As I’m writing this (Aug. 20, 2017) there is a headline, “Atlanta NAACP calls for boycott of NFL, Falcons game over treatment of Colin Kaepernick.” Now there is a goal worth fighting for- take it to the streets to support a whiney rich guy, the beneficiary of a lifetime of “white privilege” who somehow discovered he can grow one heck of an afro, to demand he receive another multi-million dollar contract to play a meaningless game. Actually there is something we have in common- boycotting the NFL out of existence wouldn’t be a bad thing. As for the white supremacists, to the extent they exist, I have no idea what their demands might be.

Ultimately we are seeing selfish and bratty children, steeped in wealth and greed, who are seeking some kind of affirmation and meaning in their pointless lives. James Alex Fields Jr, the murderous nitwit who ran over a bunch of people, killing one, in some fit of righteous rage, had the complete modern loser package- video gamer, anger control issues, psychotropic med user, Facebook page; he’s of the right age to have been the product of public school self-esteem enhancement programs. It’s no fun psychologically being a loser, but it takes effort and some degree of self-sacrifice to become an accomplished person, so why go through the bother when all one needs to do is dress in black, cover your face and go about breaking windows, setting fires, and beating up people with whom you disagree. Or simply ram your car into a crowd of people.

A significant difference between conservatives and the progressive left, assuming for example that James Alex Fields Jr. is sentenced to a long prison term, is that he’s not going to become some kind of conservative martyr, regardless of whether or not he writes children’s books in prison. Nor will he be asked, in decades hence, to be a guest of honor at some “conservative pride” parade. Come to think of it, there are no conservative pride parades. Conservatives unhesitatingly disavow such violent idiocy, whereas the left endlessly equivocates if the offender’s politics were correct, and even engages in blatant hagiography. How tiring it is to see the same old contortions coming from the left to trivialize acts of murder and violence: the violence was isolated so therefore not really significant (“he was a ‘lone wolf’”), excused for extrinsic reasons (he was a victim of economic and social forces), ignored (NPR’s coverage of leftist avenger James Hodgkinson- see http://conservativeproletariat.com/?p=452), or even celebrated (threats to assassinate Trump). In eight years of the Obama presidency I don’t recall a single conservative celebrity holding a fake severed Obama head.

In some Christian theological belief systems, especially conservative ones, a believer is admonished to love God with all his or her heart and soul at all times, that everything one does should be to glorify God, and anything done otherwise is a sin. While I’m an agnostic who at times can be childishly sarcastic of Christianity (Did you just pass gas? Yeah, but I did it for the glory of God), I understand that the very impossibility of this exhortation is the purpose itself: to always strive to know and love God more fully. The progressive left has its own similar theology- that while their set of beliefs is endlessly fluid, in order to avoid excommunication one must accept and embrace them with all their heart and soul at all times, without question.

It is exquisitely difficult to achieve a progressive state of grace as it requires people to constantly disabuse themselves of previously held sacred secular beliefs, rebel against logic, and discard inclinations of kindness, reconciliation, and decency. The source of the latest doctrine is rarely apparent: perhaps a 19 year-old Oberlin College student majoring in post-modern lesbian literature studies conjured up a new gender identity and disseminated it on her IPhone via social media while having her second latte at Starbucks. It is not to be debated, one must simply acknowledge that this heretofore nonexistent identity has suffered centuries of oppression which must be righted by whatever social justice means necessary.

Somewhere it is recalled that book banning and censorship were anathema to liberal ideals. Suddenly, however, it is required lest a word or idea contained in the writing might trigger a fleeting uncomfortable emotion in a fragile reader. The formerly bedrock liberal philosophy of “I may disagree and even abhor what you have to say, but I will defend to death your right to say it” is transformed into we must bring all societal and cultural (and ideally legal) pressure to bear to prevent the expression of opposing ideas. The concept of “we agree to disagree” has become a frenzy of rioting and window breaking to avoid hearing thoughts that might potentially conflict with the progressive dogma of the moment.

Previously you scorned the practice of head covering by observant Jewish women as oppressive, now you delight in the wearing of burkas by Muslim women. An observant progressive must believe that the many women who accused Bill Clinton of sexual impropriety and even rape were part of a vast right-wing conspiracy and deserved to be belittled as trailer park trash. At the same time you believe that any accusation by a female against a male must be accepted without question, and the accused should have no recourse.

You as a male remember that vague homosexual thoughts are part of the normal psycho-social development of young teens, between the girls have cooties phase and the they are mighty attractive end result. To be a progressive in good standing, however, you must exploit these transient feelings of your young son and encourage his evolution into an aggressive homosexual activist, as well convince your roughhousing seven year-old daughter she should become a little boy.

A leftist mother recalls with great fondness the nurturing times spent reading to her young child, but later learns from a leftist British sociologist that by doing so she was facilitating white privilege and she is now required to dwell in guilt. The overweight girl from high school you see at the 10th reunion and she is now slender and fit. You want to say something complimentary but you hesitate for fear of accusing her of body-shaming other fat people by losing weight or being a misogynistic pig for even noticing.

Still, even a part of you dreads the inevitability that the giants of Black American history, Frederick Douglas, Benjamin O. Davis, Martin Luther King, Jr, people you admired and respected your entire life, will be reviled once some progressive left professor Tweets out that they believed in equal rights, equal opportunity, and that a person should be judged not for the color of their skin but by the content of their character, tenets now antithetical to progressive philosophy. Statues of Frederick Douglas will have to be toppled, all those Booker T. Washington elementary schools will have to be changed to Nkechi Amare Diallo (Rachel Dolezal) Inclusive Elementary, and all those MLK, Jr Boulevards will have to become Maxine Waters Street.

Aside from the endless doctrine you must embrace and celebrate, perhaps the most difficult aspect of being a leftist progressive in good standing is the degree of hatred, rage, and bitterness demanded of you. Sure, you hate Trump with all your heart and soul, but you are also required to hate anyone who supports him, regardless if they are your parents, siblings, and even children. The hate must be all consuming, liberally expressed, and applied to any and all who disagree. You’re not really sure what the goals are, what your beliefs should be, and you aren’t supposed to think for yourself, but you must keep chanting, “Social justice by any means necessary!”

All semi-humor aside, there probably is a real potential for destruction and violence becoming commonplace in our country and society. The danger, however, is not from extremists per se: whatever pseudo-ideologies they rage about have been around forever, the modern difference being the absurd wealth and materialism in which they are saturated. Nor does the danger come from conservatives: we are more inclined to shake our heads, hope that Scotty beams us up, and go on living our lives; conservatives do not make rationalizations for the violent losers who try and claim some kind of kinship. The real danger comes from the lack of traditional liberals- political, academic, media, entertainment- providing checks and balances to the tantrums of their spoiled progeny and prodigies. I truly don’t know if they no longer exist or are simply too cowardly and weak to stand up and exert some kind of mature and adult leadership and guidance. I do know, however, that without some brakes being applied to this orgy of self-indulgence and solipsism, optimism is not fully warranted.

One thought on “The Rear End of the Political Circle”