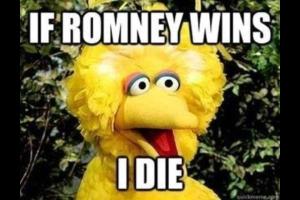 Now and then the usual suspects of the Republican establishment- the Mitch McConnell’s, John Kasich’s, etc- make meaningful, principled, and at times intelligent statements about any given issue or topic. Hence, it is generally disheartening, though occasionally amusing when, like a dog yanked back on a leash, they have to modify or retract them when faced with the accusations we’ve come to know so well: misogynist, various prefixes followed by “phobe,” and of course racist. One such phrase we have heard for years, usually during faux budget negotiations, is “They want to kill Big Bird.”

The origin the Corporation for Public Broadcasting (CPB) and its entities of PBS and NPR extends back only to the 1960s and can be succinctly described as the product of Lyndon Johnson’s conflicted emotions. He viewed himself largely as an unsophisticated hick and, especially when associated with the cosmopolitan Kennedy’s, yearned for acceptance by the elites. From a policy standpoint this translated to a perhaps noble albeit Quixotic goal of “bringing the arts to the masses,” but in reality has meant decades of heavily subsidized entertainment for the educated and wealthy. Since inception tax dollars given to this therapy for Lyndon Johnson’s inner turmoil has probably totaled in the billions- for 2014 CPB alone received close to half a billion in tax dollars.

Not surprisingly, to be “for” tax funding of CPB, etc imparts an aura of lover of the “arts,” broadmindedness, sophistication, compassion, and humanity. To be “against” stigmatizes one as an uneducated right-wing nut who has an unnatural attraction to pick-up trucks and lives in fear of fluoridated water.

I am a little too old to have watched Sesame Street (premiered in 1969) and I’m ambivalent as to whether it has been truly educational without indoctrination or more of a guilt-free way to plop your kids down in front of the TV. One can state with a clear conscience, however, that the Sesame Street franchise has been shamelessly marketed for decades with great remunerative success (from 2003 to 2006, Sesame Street made more than $211 million from toy and consumer product sales; I not sure if this includes the exorbitant admission price I paid to see Sesame Street on Ice in 1988 when my son was two). Nevertheless, the accusation that “they want to kill Big Bird” recurrently engenders night sweats and tremors in congressional Republicans.

Certainly over 50 years PBS has provided us with some fine upscale programming (though the only time I saw any of Conan the Barbarian was curiously on a PBS station; I think there was some nudity, thank goodness). The issue is not whether they have some fine programming, the issue is who benefits. Let us be honest: people residing in Section 8 housing, various urban projects, and trailer parks aren’t glued to their radios listening to the Splendid Table (“…public radio's culinary culture and lifestyle program that celebrates food and its ability to touch the lives and feed the souls of everyone”) or animatedly guessing the value of that painting found in grandma’s attic on the Antiques Roadshow. The audience and demographic for the vast majority of PBS/NPR programming is certainly composed primarily of the wealthy and educated. Hence, a reasonable question is, are the rich deserving of tax-subsidized entertainment?

Last week I was up in the Adirondack Mountains south of Canada doing some house renovation work and was not well “connected.” On Thursday morning I did check e-mail and news and learned of the very newsworthy shooting of the house Republican Majority Whip and others. Seeking updates in an area of sparse radio coverage I reluctantly tuned in to the dreaded NPR morning programming, with the nauseatingly saccharine timbre, tone, and cadence of the announcers; as obnoxious as any equally saccharine pre-recorded Bible studies one hears on Christian radio. The half hour news summary finally came on and, just 24 hours after the shooting, the lead story was not the shooting but the continuing saga of the Trump/Russia investigation. The NPR editors placed the story of the attempted assassination of the Majority Whip in the second slot and pointedly emphasized authorities were examining possible motivations, failing to even mention the perpetrator wore his leftist progressive angst on his sleeve for all to see.

For NPR News, as with what is collectively called the mainstream media, maintaining the progressive narrative takes precedence over actual news reporting. Therefore it can only be Republicans and conservatives strutting about like Brown Shirts in 1920’s Munich looking to beat down people who look, sound, or think differently from themselves. The minds of progressives are so filled with happy thoughts that Love is Love and Love Trumps Hate that James Hodgkinson certainly could not have been motivated to murder by his progressive politics; there must have been another reason. Needless to say, if the victim had been a Democrat and the shooter politically motivated by right wing leanings, it would have consumed the NPR news cycle, with emphasis on the right wing part.

We’ve entered an unfortunate age where gross slanting of news by organizations traditionally considered objective is common. Nevertheless, subtle slanting- nuanced prioritizing of stories, things deftly said, implied, or omitted so as to obfuscate the facts at hand, etc, remains effective. It doesn’t take great talent to do this but somehow its practitioners are held in high esteem, much like Miley Cyrus is heralded as a “music artist.” PBS and NPR are exceedingly adept at this and understandably so: their biases are shared by their target audience, wealthy and educated progressives, who prefer to remain comfortable in the warm bosom of their cultural and political narratives.

The CPB/PBS/NPR franchise is like the Christian who fornicates on Saturday night then shouts “Praise Jesus” louder than anyone else in church the next morning. It’s not the adultery that is so exasperating per se, it’s the hypocrisy:

The myth that they are commercial free when in fact they run ads just like everyone else, with sponsors including massively wealthy corporations, elite progressive foundations and, depending on the program, local businesses. That they usually run the ads preceding or following their shows doesn’t mean they are not crass commercials, despite always being capped off by the quaint, “and viewers like you."

Undeniably they have at times aired excellent programs, including child oriented shows such as Mr. Rogers Neighborhood and perhaps Sesame Street. While I admittedly have not had success researching PBS/NPR demographics (one related stat I found is interesting- Thomas Corley, author of “Rich Habits: The Daily Success Habits Of Wealthy Individuals,” found only 6% of the wealthy watch reality shows, while 78% of the poor do), it is doubtful the ostensible targeted audience- the masses- are significant consumers. Rather, support and occasional watching or listening to PBS/NPR has become essentially a litmus test for progressive acceptance.

While our cultural mindset is that receiving government funding somehow imparts legitimacy, PBS/NPR should be able to stand on its own or be fully propped up by its vocal and wealthy proponents. Let’s not fool ourselves- rich people, including the many who refuse to acknowledge their wealth, like to spend money on Self, generally to the exclusion of Others. The tax monies received by the CPB are not insignificant but could easily be replaced by its supporters, if they really believed in action versus utterances, and we could blessedly be free of this tedious funding debate. What the heck, if we finally end government funding I’ll make a pledge at the $60 level, and they don’t even have to send me the Kings of Dew-Wop CD collection.

It is a fantasy that CPB/PBS/NPR, being “non-profits,” are operated by benevolent people who are willing to sacrifice their material wealth for the greater good of their mission. Like televangelism, there is serious money to be had in the world of “non-profits.” Rather than taking the effort to place financial stats in prose form, I simply end with a listing of some examples of salaries-

Note these are compensation amounts at just the national level. There are hundreds of affiliate stations paying generous salaries: the 2014 990 for the Detroit PBS local shows the CEO making $378,343 and the Assistant Secretary $215,823; in 2010 or 2011 14 employees at the Boston affiliate WGBH made more than $200,000.

2 thoughts on “The Republican’s Irrational Fear of Big Bird”