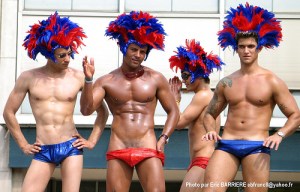 If intellectually you really can’t handle much beyond simple slogans such as “We’re a nation of immigrants” and “Diversity is our strength,” but they give you a comforting feeling. Besides, you’d never put yourself in a position where you’d have to further explain them

If you feel ashamed to be an American because we generally aren’t multilingual, even though you speak only English

If you see people using food stamps (“SNAP”) to buy items you can’t afford but you feel terrible guilt when you think maybe the benefits should be limited to obtaining healthier and more staple items, such as with the WIC program

If you have a fantasy, as a parent, that your little boy will hint at a desire to be a little girl and you jump at the chance to have his genitals mutilated and his physiology pharmaceutically altered so your progressive friends will think you’re really cool

If you are a female and think that by not shaving your armpits, and letting people know, you are making a bold and brave feminist statement, a degree of courage on par with soldiers storming the beaches on D-Day

If you really like abortion but heard somewhere that black babies are terminated at much higher rates than other ethnic groups. This doesn’t quite seem right to you but then you think, “They will suffer horrible oppression in American society so it’s probably better if we kill them before they’re born.” Besides, it’s that many less African-Americans who will receive welfare

If you support the Boycott, Divestment and Sanctions Movement against Israel because it means you are a compassionate person because you’re standing up against oppression of the Palestinians and you can feel good about yourself. You are only slightly bothered that you have no idea what you are talking about, and probably couldn’t find Israel on a map

If you wake up one night in a panic because you realize all these diversity and social justice slogans you and your fellow travelers spout out are a bunch of crap, designed solely to make you feel good about yourself. You hope your words about diversity and compassion and helping the poor and oppressed impress others, but you know you would never actually do anything to truly help others that required effort, especially if it threatened your material wealth or made you feel even slightly uncomfortable

2 thoughts on “More You Might Be A Diversity Redneck If…”